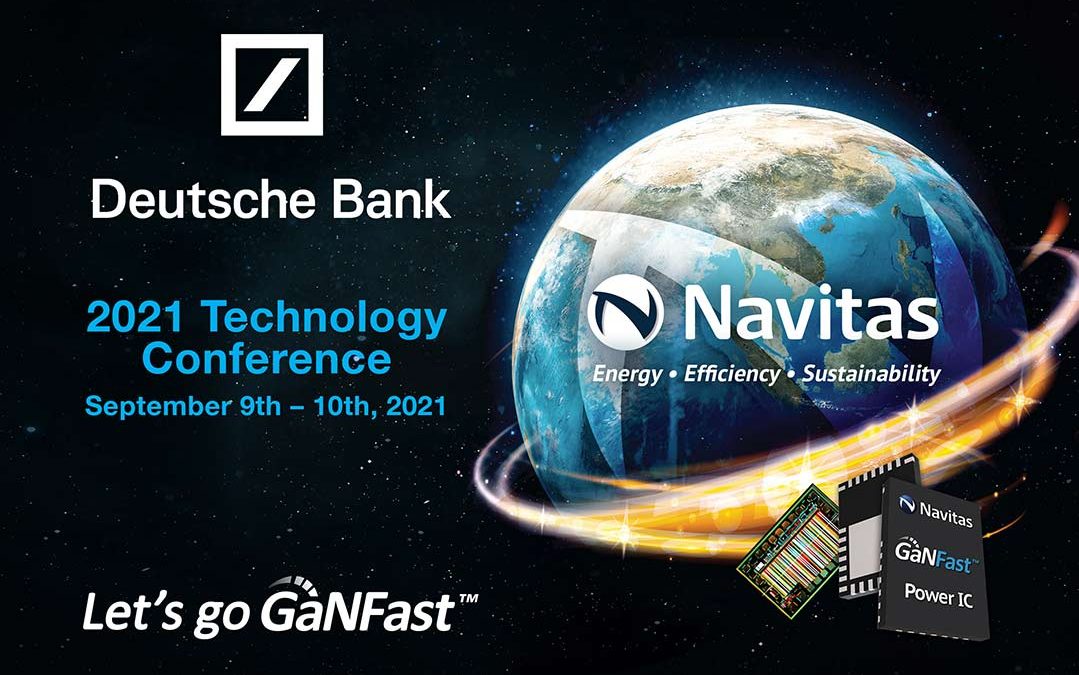 Gallium nitride (GaN) is a next-generation semiconductor technology that runs up to 20x faster than legacy silicon and enables up to 3x more power and 3x faster charging in half the size and weight. Navitas’ GaNFast™ power ICs integrate GaN power and drive plus protection and control to deliver simple, small, fast and efficient performance. With over 130 patents issued or pending, and significant trade secrets including a proprietary process design kit (PDK), Navitas believes it has a multi-year lead in next-generation GaN power ICs.

The Deutsche Bank 2021 Technology Conference includes keynotes from Intel, Broadcom and Zoom, panel discussions, and offers investors one-on-one conversations with senior executives of innovative companies at the forefront of the technology sector.

Navitas’ co-founder and CEO, Gene Sheridan, will review GaNFast power IC technology and the $13.1B market opportunity in a live presentation with Q&A at 11:50am (EDT) on Thursday September 9th. To participate, and to arrange one-on-one meetings, please contact Donna Lichvar at db.techschedules@db.com.

“We’ve already shipped over 25 million GaNFast power ICs and that’s only 1-2% of today’s available market – so a huge growth potential. From tier-1 laptop and phone companies including Dell, Lenovo, Xiaomi, LG and OPPO, we’re now expanding quickly into higher-power developments such as with Enphase for solar, and Brusa for EV markets,” noted Gene Sheridan. It’s a $13 billion GaN electrification opportunity – and we are grateful to Deutsche Bank for this platform to meet with future-thinking investors.”

Deutsche Bank (NYSE:DB) is a leading provider of financial services to agencies, corporations, governments, private individuals and institutions in the Americas. Having first established a presence in the Americas in the 19th century, the bank began independent operations in the US in 1978, opening its first North American branch in New York City. In October 2001, Deutsche Bank was the first German bank to list on the NYSE and one of the largest foreign-based employers in New York City.

Navitas Semiconductor Limited is the industry leader in GaN power IC’s, founded in 2014. Navitas has a strong and growing team of power semiconductor industry experts with a combined 300 years of experience in materials, devices, applications, systems and marketing, plus a proven record of innovation with over 200 patents among its founders. GaN power ICs integrate GaN power with drive, control and protection to enable faster charging, higher power density and greater energy savings for mobile, consumer, enterprise, eMobility and new energy markets. Over 130 Navitas patents are issued or pending, and over 25 million GaNFast power ICs have been shipped with zero reported GaN field failures. On May 7th, 2021, Navitas announced plans to “Go Public at an Enterprise Value of $1.04 Billion via Live Oak II (NYSE: LOKB) SPAC Business Combination.

The information in this press release includes “forward-looking statements” within the meaning of Section 27A of the Securities Act of 1933, as amended (the “Securities Act”), and Section 21E of the Securities Exchange Act of 1934, as amended. All statements, other than statements of present or historical fact included in this press release, regarding the proposed transaction, the ability of the parties to consummate the transaction, the benefits of the transaction and the combined company’s future financial performance, as well as the combined company’s strategy, future operations, estimated financial position, estimated revenues and losses, projections of market opportunity and market share, projected costs, prospects, plans and objectives of management are forward-looking statements. When used in this press release, the words “could,” “should,” “will,” “may,” “believe,” “anticipate,” “intend,” “estimate,” “plan,” “seek,” “expect,” “project,” “forecast,” the negative of such terms and other similar expressions are intended to identify forward-looking statements, although not all forward-looking statements contain such identifying words.

Live Oak II and Navitas caution you that the forward-looking statements contained in this press release are subject to numerous risks and uncertainties, including the possibility that the expected growth of Navitas’ business will not be realized, or will not be realized within the expected time period, due to, among other things: (i) Navitas’ goals and strategies, future business development, financial condition and results of operations; (ii) Navitas’ customer relationships and ability to retain and expand these customer relationships; (iii) Navitas’ ability to accurately predict future revenues for the purpose of appropriately budgeting and adjusting Navitas’ expenses; (iv) Navitas’ ability to diversify its customer base and develop relationships in new markets; (v) the level of demand in Navitas’ customers’ end markets; (vi) Navitas’ ability to attract, train and retain key qualified personnel; (vii) changes in trade policies, including the imposition of tariffs; (viii) the impact of the COVID-19 pandemic on Navitas’ business, results of operations and financial condition; (ix) the impact of the COVID-19 pandemic on the global economy; (x) the ability of Navitas to maintain compliance with certain U.S. Government contracting requirements; (xi) regulatory developments in the United States and foreign countries; and (xii) Navitas’ ability to protect its intellectual property rights. Forward-looking statements are also subject to additional risks and uncertainties, including (i) changes in domestic and foreign business, market, financial, political and legal conditions; (ii) the inability of the parties to successfully or timely consummate the proposed transaction, including the risk that any required regulatory approvals are not obtained, are delayed or are subject to unanticipated conditions that could adversely affect the combined company or the expected benefits of the proposed transaction or that the approval of the stockholders of Live Oak II is not obtained; (iii) the outcome of any legal proceedings that may be instituted against Live Oak II or Navitas following announcement of the proposed transaction; (iv) the risk that the proposed transaction disrupts Live Oak II’s or Navitas’ current plans and operations as a result of the announcement of the proposed transaction; (v) costs related to the proposed transaction; (vi) failure to realize the anticipated benefits of the proposed transaction; (vii) risks relating to the uncertainty of the projected financial information with respect to Navitas; (viii) risks related to the rollout of Navitas’ business and the timing of expected business milestones; (ix) the effects of competition on Navitas’ business; (x) the amount of redemption requests made by Live Oak II’s public stockholders; (xi) the ability of Live Oak II or the combined company to issue equity or equity-linked securities in connection with the proposed transaction or in the future; and (xii) those factors discussed in Live Oak II’s registration statement on Form S-4 (File No. 333-256880) (the “Registration Statement”) filed with the Securities and Exchange Commission (the “SEC”) and Live Oak II’s final prospectus filed with the SEC on December 4, 2020 under the heading “Risk Factors” and other documents of Live Oak II filed, or to be filed, with the SEC.

Important Information and Where to Find It

In connection with the proposed transaction, Live Oak II has filed the Registration Statement with the SEC, which includes a proxy statement/prospectus of Live Oak II. Live Oak II also plans to file other documents and relevant materials with the SEC regarding the proposed transaction. After the Registration Statement has been cleared by the SEC, a definitive proxy statement/prospectus will be mailed to the stockholders of Live Oak II. SECURITYHOLDERS OF LIVE OAK II AND NAVITAS ARE URGED TO READ THE PROXY STATEMENT/PROSPECTUS (INCLUDING ALL AMENDMENTS AND SUPPLEMENTS THERETO) AND OTHER DOCUMENTS AND RELEVANT MATERIALS RELATING TO THE PROPOSED TRANSACTION THAT WILL BE FILED WITH THE SEC CAREFULLY AND IN THEIR ENTIRETY WHEN THEY BECOME AVAILABLE BEFORE MAKING ANY VOTING DECISION WITH RESPECT TO THE PROPOSED TRANSACTION BECAUSE THEY WILL CONTAIN IMPORTANT INFORMATION ABOUT THE PROPOSED TRANSACTION AND THE PARTIES TO THE PROPOSED TRANSACTION. Stockholders will be able to obtain free copies of the proxy statement/prospectus and other documents containing important information about Live Oak II and Navitas once such documents are filed with the SEC through the website maintained by the SEC at http://www.sec.gov.

Participants in the Solicitation