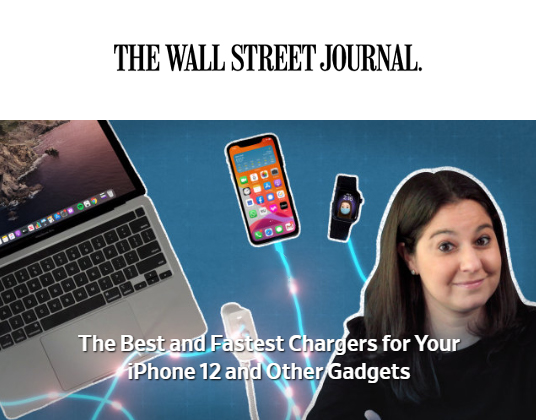 Gallium Nitride (GaN) Chargers are Crushing Silicon Performance with 3x Faster Chargers for Apple iPhone 12 and All your Mobile Devices.
Apple has announced the iPhone 12 will not have a charger ‘in-box’. Joanna Stern of The Wall Street Journal describes this as great news;
“The real charger Holy Grail is that single brick that powers it all… These multi-port chargers are faster thanks to USB-C, smarter thanks to PD, and smaller thanks to GaN, a new technology nicknamed after a semiconductor made from gallium nitride.”
“Instead of the typical silicon, gallium nitride is 40% more energy efficient and doesn’t generate as much heat when in use,” said Gene Sheridan, CEO of Navitas Semiconductor, which makes the key component for most GaN chargers.
Users can now fast charge their iPhone, iPad and MacBook at the same time, with next-generation GaN technology already in use by tier-1 companies like Dell, Lenovo, Xiaomi and OPPO, plus trusted accessory-makers like Belkin, Anker, AUKEY and Baseus.
Read the full Wall Street Journal Article Here
Watch the GaN Crushes Silicon Video